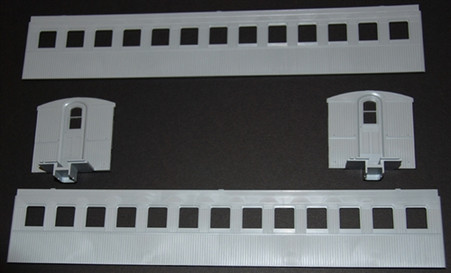 Chris Lane of On30 Annual has this to say: "The prototype for these parts were the 59 Jackson & Sharp coaches ordered in several batches between 1880 and 1882 by the D&RG. These cars were 38’-5” long (body; the overall length of the cars with platforms was 44’-4”) and they weighed 23,500lbs. They came with the “duckbill” roof, end windows and 13 single pane side windows. These windows were rather squat making for a very large letterboard and had a slight radius in each upper corner. These are generally referred to as the “early arch” style. Using San Juan sets 5202, 5203 and 5204 would yield the as-built version of these cars, with the exception of the end windows, which started to be blanked out quite early. Cars with this appearance survived quite late (into the early 1940’s) on both the D&RGW and RGS (the Rio Grande Southern bought their passenger cars from the D&RG out of these class of cars), and examples survived much later on both roads in MOW service. D&RGW No. 307 at the Colorado Railroad Museum is an example of a surviving car that could be accurately built with the above-mentioned parts."

This product hasn't received any reviews yet. Be the first to review this product!